Harnessing light’s energy into nanoscale volumes requires novel engineering approaches to overcome a fundamental barrier known as the “diffraction limit.” However, researchers in the Cunningham Group have breached this barrier by developing nanoantennas that pack the energy captured from light sources, such as LEDs, into particles with nanometer-scale diameters, making it possible to detect individual biomolecules, catalyze chemical reactions, and generate photons with desirable properties for quantum computing.

See the full press release at:

For full details, see our publication in Nano Letters: 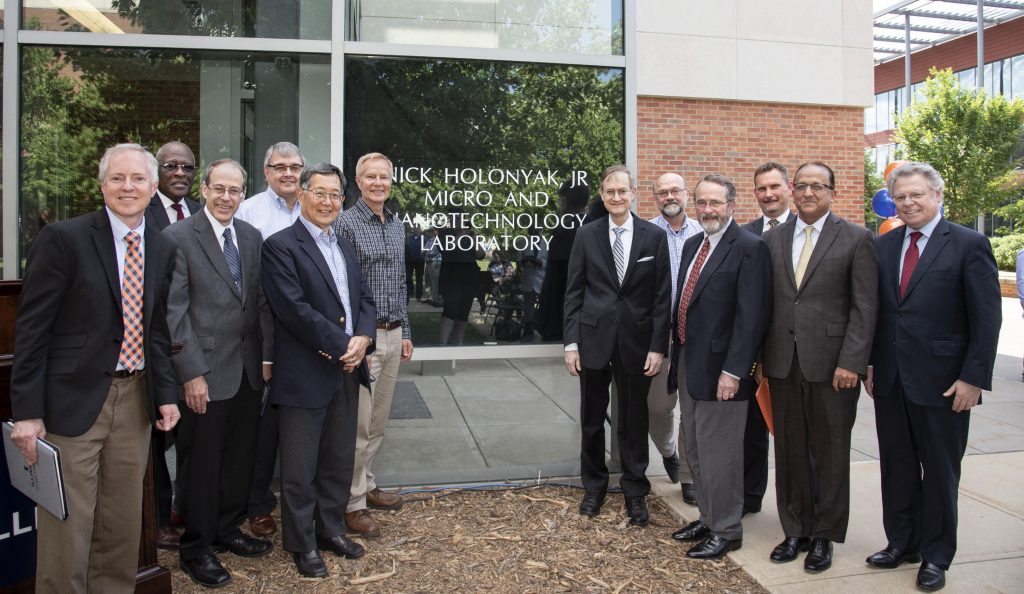 After productive stints with Bell Labs and GE and service in the U.S. Army Signal Corps in Japan, Holonyak joined the Illinois faculty in 1963, establishing a research program in the Electrical Engineering Research Lab.

For the next forty years, Holonyak and his students would continue to produce major technology advancements such as the world’s first quantum-well laser, the impurity-induced layer disordering technique for high-power laser, and the stable native oxide for vertical-cavity surface-emitting lasers (VSCELS).

These advancements led to brighter and more efficient LEDS and lasers which are used in modern fiber-optic communications, CD and DVD players, optical storage, medical diagnosis, surgery, ophthalmology, and other applications.

A photo gallery from the ceremony can be found here. 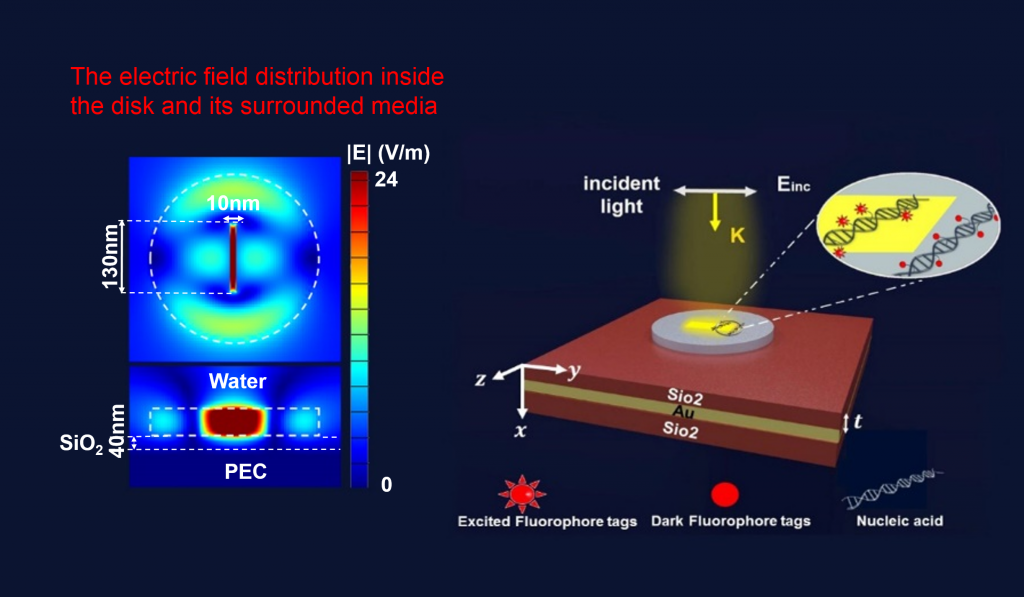 A new paper by Laaya Sabri, Qinglan Huang, Jui-Nung Liu, and Brian T. Cunningham from the Nanosensors Group at the University of Illinois at Urbana-Champaign introduces a fundamentally new class of all-dielectric nanoantenna field-enhancement structures for biosensing applications that, due to destructive farfield interference of resonant modes, functions as a nonradiating “anapole” in the visible spectrum. Unlike other dielectric and plasmonic resonator structures for electromagnetic field enhancement, anapole modes are strictly confined within their cylindrical disk structure and thus can produce a single point electromagnetic hotspot by providing a nanometer-scale opening at the anapole mode, located in the center of the disk.  Utilizing a strategy for coupling additional electromagnetic energy from an underlying mirror-backed substrate to an anapole nanoantenna in an aqueous environment, we utilize Finite Difference Time Domain simulations to demonstrate the potential for generating high-intensity, highly localized electromagnetic hotspots, for purposes of amplifying the excitation of photon emitters, such as fluorophores, that are used as tags for observing biomolecular interactions. Our simulations show that an anapolar nanoantenna comprised of a simple silicon nanodisk with a central slot fabricated on a dielectric substrate will provide a 3.5x electromagnetic field enhancement of |E|, and that integration of the nanoantenna with an underlying mirror-backed substrate will be capable of 11.5x enhancement of |E| in the 630-650 nm wavelength range that is compatible with the excitation of commonly used fluorescent dyes. As fluorophore photon output scales with excitation power, and thus |E|2, our results suggest the potential to obtain ~130x enhanced excitation factor.  In this work, we characterize the effects of the substrate design and slot dimensions on the field enhancement magnitude, for devices operating in a water medium.  By applying additional mechanisms for enhanced photon capture and reduced fluorescence lifetime, our models show the potential to obtain ~700,000x amplification of detectable signal from photon emitters confined to the 0.001 – 0.065 femtoliter volume of the electromagnetic hotspot in the anapole device. 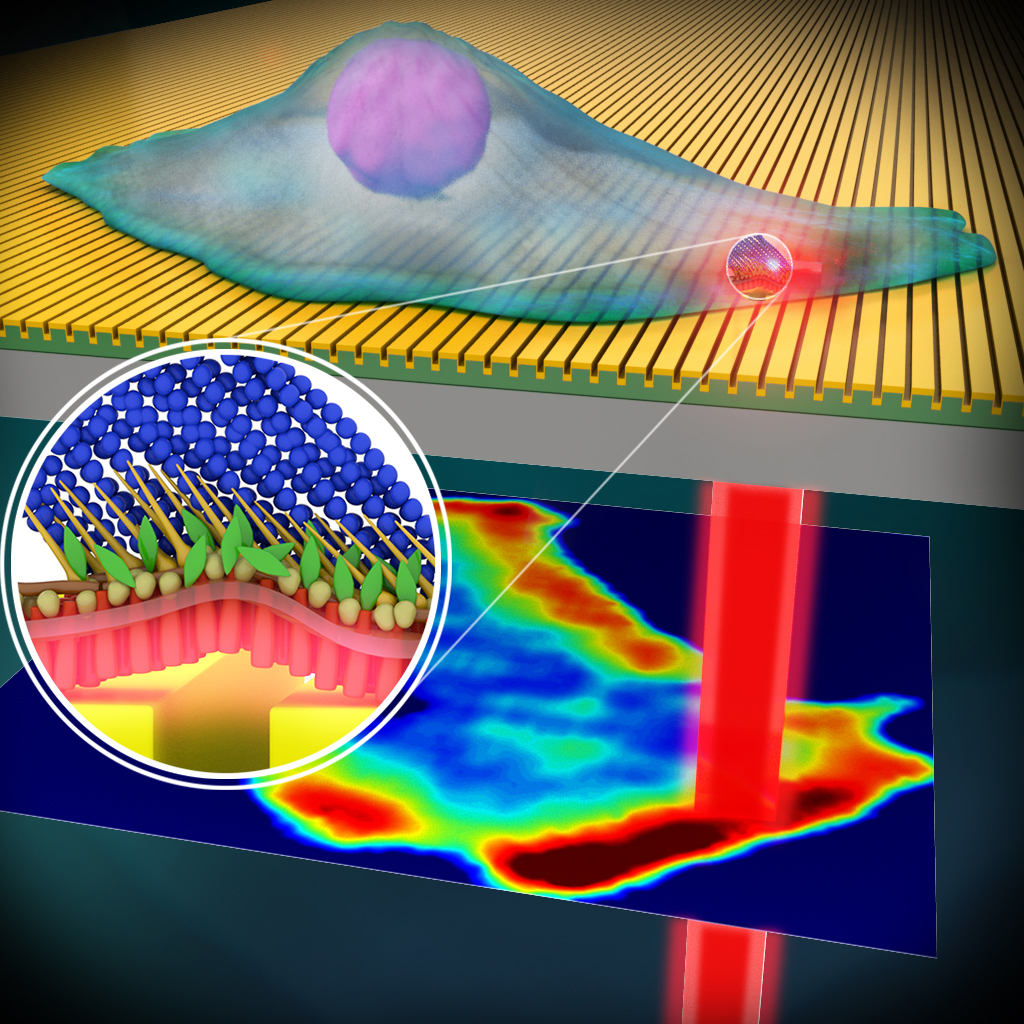 Focal adhesions are large specialized proteins that are located in the area where a cell membrane meets the extracellular matrix (ECM), a collection of molecules surrounding the cells that provide support and regulate micromechanical signals to the cells. Examining focal adhesions is one of the key elements to understanding how a cell proliferates, differentiates, and migrates—which can help in the treatment of diseases like cancer.

“This is a new kind of biophysics method used to measure the peak intensity shift (PIS) of the spectra reflected from the biomaterials on a photonic crystal surface,” said Yue Zhuo, a Beckman Institute Postdoctoral Fellow and first author on the paper. “The PIS indicates the variation of cluster size in the focal adhesion area of the cell while it’s alive.”

Previous methods involve labeling the cells with fluorescent dyes or tags, which not only can change the physical and chemical makeup of the cell, but also can prove cumbersome for researchers. “Typically people look at focal adhesions with fluorescent tags or proteins,” Zhuo said. “But fluorescent imaging is an invasive imaging method that may change the conformations or block the binding sites of the proteins in the focal adhesion area.”

Fluorescence microscopy is severely limited by an effect called “photobleaching,” in which the fluorophores only maintain their brightness for several seconds. However, many important cell processes occur over the course of minutes, hours, or days. Because PROM does not use fluorophores, and only uses low-intensity illumination, there is not a limit to how long live cells can be measured.

“In the future, we plan to use PROM to study stem cell differentiation, which can occur over the course of several weeks,” said Zhuo.

“PROM is providing real-time information about dynamic processes that occur specifically on cell membranes that is not available by any other method,” said Brian Cunningham, a professor of electrical and computer engineering and bioengineering, and the principle investigator for the PROM project. “Since so many biological processes are mediated through attachment of cells to surfaces, PROM provides a unique view of migration, chemotaxis, chemotoxicity, differentiation, biofilm formation, and division. We see PROM as an exciting new tool for cell biologists that can also be applied towards personalized anticancer drug selection, tissue engineering, and sensor-integrated tumor modeling.”

The research is funded by a National Science Foundation grant and the National Institutes of Health. Zhuo also thanks the Beckman Postdoctoral Fellowship for financial support. 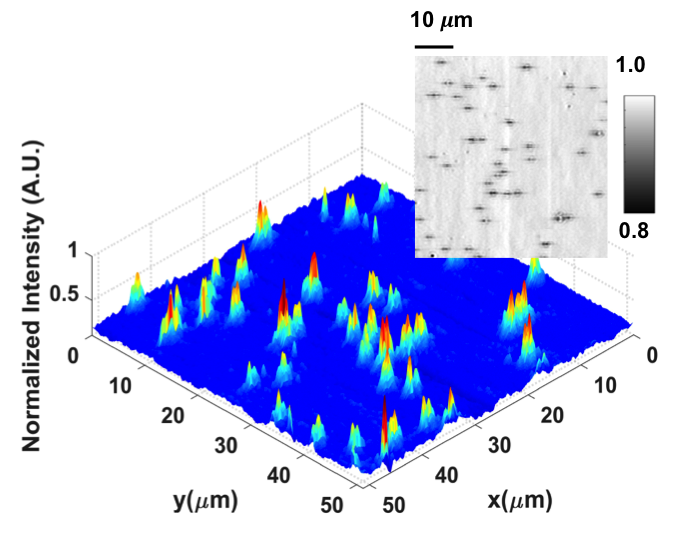 JANET MCGREEVY | 1/29/2018 3:56:12 PM
Have you ever wondered how ground-breaking, innovative research ideas get their start? How does an interdisciplinary research team come together, with just the right people to move the research forward? The Omics Nanotechnology for Cancer Precision Medicine (ONC-PM) theme is a good case study in how peer networking, collegiality across institutions, and interdisciplinary collaboration contribute to meaningful research that can change the world of medicine.

The theme got its start when Prof. Andrew Smith and Prof. Brian Cunningham co-organized an on-campus symposium in 2015 on the topic of “Super-Resolution Imaging Technologies”. Dr. Manish Kohli from Mayo Clinic attended this symposium, leading to discussion amongst the three regarding the topic of cancer diagnostics. Cunningham explains “The symposium led to some discussion between the three of us, and developing some concepts for new cancer diagnostics that would be capable of being ultrasensitive for the most demanding applications, like detecting a handful of miRNA or mRNA molecules in a single droplet of blood. Manish already had a great collaborator at the University of Wisconsin, Prof. Liang Wang, with expertise in bioinformatics. Together, they had already been clinically validating which biomarkers had concentrations that tracked with successful response to drug therapy.”

This core group of four people next sought to build the team’s bench strength to include collaborators with experience in genomics, bioinformatics, next-generation sequencing, cancer biology, chemistry, and biochemistry. Cunningham took the lead in preparing a proposal to establish a new theme at the Carl R. Woese Institute for Genomic Biology (IGB) at Illinois. Previously, there has not been a similar theme focused on genomics-based diagnostics, and says Cunningham “A campus as strong as ours needs to be at the forefront of this area. IGB is the perfect environment for supporting interdisciplinary science with very ambitious goals.”

Kohli’s efforts to obtain seed funding from a benefactor at Mayo Clinic helped the research team get the technical work off to a strong start, and to build some preliminary data that would strengthen their grant proposals.

The group has been very busy since establishing the ONC-PM research theme. For example, they have been preparing multiple proposals to the National Institutes of Health (NIH) and to the Army, to obtain additional funding to support the work. Kohli is acutely aware of the limitations of existing technology, and Mayo Clinic has been preparing an annotated bio-specimen repository, collecting blood samples from cancer patients, and providing guidance on the type of diagnostics that would make a difference in the way that cancer is managed.

The team’s collaborator at the University of Wisconsin, Prof. Liang Wang, continues to analyze DNA sequencing data from tumors, to identify mutations measured from the blood of cancer patients, leading to the identification of more and more biomarkers that can be incorporated into the diagnostic tests developed by the team.

The team has also hired an IGB Fellow postdoc scientist, Taylor Canady, to join the theme. Canady started work about 4 months ago, and he is making the lab efforts move along very quickly. The team is also setting up lab space in IGB, where they are building a new Photonic Crystal Microscope dedicated to diagnostic purposes.

Their chief goal is to develop use-at-home sample collection assays that can be employed to identify sub-classes of cancer, as well as to track treatment efficacy and progress. Facilities at the Micro & Nanotechnology Laboratory (MNTL) and the Carl R. Woese Institute for Genomic Biology (IGB) will be used to conduct theme research.

Researchers envision the patient using a finger stick to collect a drop of blood that would then be placed into a cartridge and mailed to a laboratory for assessment. With this scenario, the patient should be able to reduce or eliminate clinic visits for routine blood work. Additionally, researchers want to assist clinicians to identify the distinct treatment that is most likely to work for a specific patient.

The team is framing their research in terms of increasing accessibility, reducing costs, and enhancing effectiveness. At the heart of their work is mitigating patient stress, by making the ongoing testing process less invasive and reducing the need to travel so often to a clinic or medical facility.

As you might expect with MNTL involved, developing instrumentation with a smaller—and less expensive—footprint is a primary objective. Cunningham, team lead, describes “…a desktop-sized instrument that may cost only several thousand dollars, rather than a genome sequencing approach that requires a million dollar instrument.”