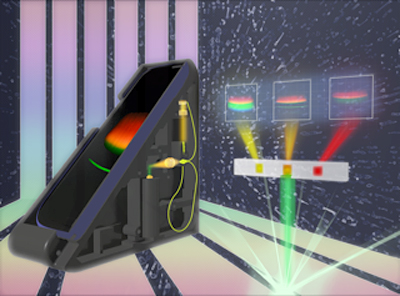 A multidisciplinary group that includes the University of Illinois at Urbana-Champaign and the University of Washington at Tacoma has developed a novel platform to diagnose infectious disease at the point of care using a smartphone as the detection instrument in conjunction with a test kit in the format of a credit card. The group is led by UI Bioengineering and Electrical and Computer Engineering Professor Brian T. Cunningham, UI Bioengineering Professor Rashid Bashir, and University of Washington at Tacoma Professor David L. Hirschberg, who is affiliated with the Department of Sciences and Mathematics, division of the School of Interdisciplinary Arts and Sciences.

Findings have been published in the journal Analytical Chemistry, demonstrating the detection of four horse respiratory diseases, and in the journal Biomedical Microdevices, for which the system was used to detect and quantify the presence of Zika, Dengue, and Chikungunya viruses in a droplet of whole blood. Project collaborators include Dr. David Nash, a private practice equine expert and veterinarian in Kentucky, and Dr. Ian Brooks, a computer scientist at the National Center for Supercomputing Applications at Illinois.

The low-cost, portable, smartphone-integrated system provides a promising solution to address the challenges of infectious disease diagnostics, especially in resource-limited settings or in situations where a result is needed immediately. The diagnostic tool’s integration with mobile communications technology allows personalized patient care and facilitates information management for both healthcare providers and epidemiological surveillance efforts. Importantly, the system achieves detection limits comparable to those obtained by laboratory-based methods and instruments and does so in about 30 minutes.

A useful capability for human point-of-care (POC) diagnosis or for a mobile veterinary laboratory is to simultaneously test for the presence of more than one pathogen with a single test protocol, which lowers cost, saves time and effort, and allows for a panel of pathogens, which may cause similar symptoms to be identified.

Infectious diseases remain the world’s top contributors to human death and disability, and with recent outbreaks of Zika virus infections, there is a keen need for simple, sensitive and easily translatable POC tests. The Zika virus appeared in the international spotlight in late 2015 as evidence emerged of a possible link between an epidemic affecting Brazil and increased rates of microcephaly in newborns. Zika has become a widespread global problem — the World Health Organization (WHO) documented last year that since June 2016, 60 nations and territories report ongoing mosquito-borne transmission. Additionally, since the Zika virus infection shares symptoms with other diseases such as Dengue and Chikungunya, quick and accurate diagnoses are required to differentiate these infections and to determine the need for aggressive treatment or quarantine.

For the research effort, horses were used as an animal model for respiratory disease in humans and food animals.

“You can often more easily develop diagnostic tools for human use by coming in to development from the animal side of things first,” Nash said. “Many diseases show up first in animals — kind of the canary in the coal mine.”

A key project contributor, Nash commented on the financial impact of infectious disease outbreaks in horses: “It’s costly to horse owners and trainers and disrupts the business operations of all equine sports. Consider this — on December 25, 2016, a single horse stabled at the Fair Grounds Race Course in New Orleans experienced a fever and subsequently developed neurological symptoms. The state diagnostic lab was 100 miles away and was closed for the Christmas holiday. The end result was an equine herpesvirus-1 (EHV-1) outbreak that resulted in the quarantine of over 200 horses at the racetrack and a serious financial loss for horse owners and the racetrack owner, Churchill Downs, Inc. Imagine the consequences if they ever had to postpone the Kentucky Derby due to a disease outbreak.”

The technology is intended to enable clinicians to rapidly diagnose disease in their office or in the field, resulting in earlier, more informed patient management decisions while markedly improving the control of disease outbreaks. An important prerequisite for the widespread adoption of POC tests at the patient’s side is the availability of detection instruments that are inexpensive, portable and able to share data wirelessly over the internet.

The system uses a commercial smartphone to acquire and interpret real-time images of an enzymatic amplification reaction that takes place in a silicon microfluidic chip that generates green fluorescence and displays a visual readout of the test. The system is composed of an unmodified smartphone and a portable 3D–printed cradle that supports the optical and electrical components and is connected to the rear-facing camera of the smartphone.v

The software application operating on the smartphone gathers information about the tests conducted on the microfluidic card, patient-specific information, and the results from the assays, that are then communicated to a cloud storage database.

“This project is a game changer,” Nash said. “This is the future of medicine — empowered front-line healthcare professionals. We can’t stop viruses and bacteria, but we can diagnose more quickly. We were able to demonstrate the clear benefit to humankind, as well as to animals, during the proposal phase of the project, and our results have proved our premise. Next I want to go into the field, multiple sites, multiple geographic locations, and test in real-world situations.”

Fu Sun, U of I graduate student and research assistant, sees this project as fulfillment of one of her primary career objectives: “I entered graduate school with the hope to make a better world by developing biomedical devices that can facilitate effective disease prevention, diagnosis or treatment. This project is in line with my goal since it provides a point-of-care solution for the fast diagnosis of infectious diseases. Connected to a cloud database through a smartphone, it helps healthcare providers in the field embrace the era of big data and the Internet of Things.”

The system represents the only platform to date that can multiplex detection of viral and other nucleic acid targets on a portable POC setup using one droplet of bodily fluid, including whole blood.

For Nash, the experience of working with the University of Illinois team and other project collaborators was mutually beneficial. “A diverse team was actually created here,” he said. “A wicked smart group of people! I can’t envision going into a project without engineers now.”

The work was funded by NSF grant 1534126 and the University of Illinois at Urbana-Champaign. Any opinions, findings, conclusions, or recommendations in this work are those of the authors and do not necessarily reflect the views of the National Science Foundation.

About the Micro and Nanotechnology Laboratory

The University of Illinois Micro + Nanotechnology Laboratory (MNTL), is one of the country’s largest and most sophisticated university facilities for conducting photonics, microelectronics, biotechnology and nanotechnology research. A crown jewel of the University of Illinois College of Engineering, MNTL is the place where campus researchers and visiting scientists come to design, build and test innovative nanoscale technologies with feature sizes that span the range of atoms to entire systems. The building houses faculty and graduate students from the departments of Electrical and Computer Engineering, Bioengineering, Physics, Mechanical Science and Engineering, Materials Science and Engineering, Agricultural and Biological Engineering, and Chemical and Bimolecular Engineering.